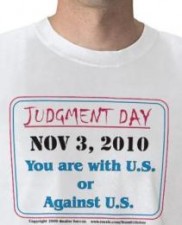 And while there was a debate for the majority of the segment, Williams essentially described his organization and others are already looking toward “Judgment Day” – next year.

Williams said at the end of the segment, “You are seeing the beginnings. New Jersey, Virginia and the 23rd District of New York are going to be the first three victories in the countdown to Judgment Day, November 2, 2010.”

This is an actual movement, with a website up, and partnerships from FreedomWorks and others. You can even buy “Judgment Day” memorabilia.

According to TVEyes.com, “Judgment Day” has been mentioned on every cable news network within the last two months, in relation mainly to the Tea Party Express, which is the key driver of the term. In fact, it was mentioned in this context last night on MSNBC as well – by Rachel Maddow:

If the language that the RNC is using in that radio ad sounds familiar to you, it may be because you’ve seen it on the side of a Tea Party Express bus rolling through your town. The paint job on the “Judgment Day” bus for the Tea Party Express includes calls to end the bailouts, reduce the size of government, stop the out of control spending, enough is enough. The national Republican party and the Tea Party movement are starting to become one in the same.

With so few meaningful races this year, it makes sense to look toward 2010. But what happens if these first three victories don’t go the tea partiers way? They’ve likely wrapped up the Virginia governor race, but conservatives could conceivably lose in New Jersey and in New York’s 23rd district. But with the language being used, this year doesn’t mean much. It’s all about “Judgment Day” – and that’s not until 364 days from now.