Today’s Paternalistic Nonsense: 3/4ths Of MSNBC’s The Cycle Wants To Force You To Vote
VIDEO

Today’s Paternalistic Nonsense: 3/4ths Of MSNBC’s The Cycle Wants To Force You To Vote 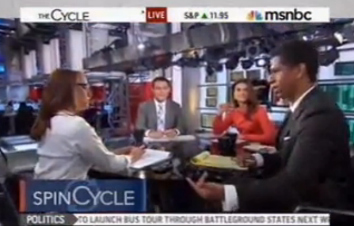 Somehow during Wednesday’s edition of MSNBC’s new show The Cycle, the topic of compulsory voting came up. S.E. Cupp notwithstanding, the hosts believe they know what’s best for a health democracy: forcing you to vote.

Co-host Krystal Ball began the segment by listing a few things the government mandates we do, like purchase health insurance (maybe not…after tomorrow), purchase car insurance, and vaccinate children for school. She then suggested her own mandate: “I think we should all be required to vote.”

The ensuing discussion oozed with smug paternalism, guided by this misguided belief that if only we forced everyone to vote then suddenly they’d become more well-learned about the electoral process. Once again, some of The Cycle‘s hosts fall prey to the “wishing it so will make it so” fallacy.

Co-host Steve Kornacki made the argument that we should require people to “show up at the polls like you’re required to show up at the courthouse if you get a summons. You can cast a blank ballot, you don’t have to vote for any particular candidate.” This argument was recently made by former OMB director Peter Orszag, who wrote that “Jury duty is mandatory; why not voting?”

It’s true that compulsory voting in Australia has led to a voter turnout consistently 90+ percent, but why should that matter? There is no evidence that nations with compulsory voting are, as a result, better governed than those where voting is voluntary. And as Reason‘s Tim Cavanaugh points out, “are the differences in electoral results between the United States and Australia so great that we want to impose more paperwork and travel or postage?” Not only that, but people like Kornacki often cite that dozens of countries already make voting mandatory. Which includes such vibrant democracies like Libya, Argentina, Congo, Lebanon, and Egypt.

Co-host Touré got in on the action and said he wants voting registration to be mandatory. He waxed platitudinous: “If you believe in America, if you believe in any nation that’s democratic, then you understand you have to participate in that nation, and in the process of choosing who governs.”

He then went after those who abstain from voting for political reasons: “If you don’t like government, then you’re going to say, ‘Well, I’m not going to vote because I don’t like them and it’s always the same guy.’ That’s the reason why you should run to the polls and get involved!”

Yes, casting one vote will really make a difference in ending a status-quo two-party system from which some people purposely abstain. (By the way: you do realize that your vote is actually worthless, right? Mathematically speaking, of course. You have a greater chance of dying in a car accident on the way to the polls than you do your vote actually affecting the outcome of the election.)

Cupp responded to the other hosts, saying that “You think the very people who are so disengaged politically that they can’t bother to vote, these are the people you want running polls, by force, lest they be charged with a crime.”

“Do you think the people who are voting now are doing such a great job?” Ball shot back.

“You might disagree with them, Krystal, but yes, these are by definition the people who care enough to vote,” Cupp replied.

Touré then chimed in with another winner: “If we force to you vote, versus getting a fine, you will become more knowledgeable about the system.”

Once again: wishing something so does not make it so. Does he really think the majority of people who do currently vote are “knowledgeable” about the system? It probably wouldn’t. As George Mason University law professor Ilya Somin points out:

[Compulsory voting] will exacerbate the already serious problem of political ignorance. Unlike voting, acquiring and understanding more than a minimal level of political knowledge is a costly activity, which makes it rational for most voters to stay ignorant, given the low chance that their knowledge will make a difference. This is especially true for those who are not interested in public policy for reasons other than voting.

Cupp mentioned that some have suggested we institute a lottery system where people can be entered to win money when they cast a vote. “But I don’t think that coercion or bribery is going to foster patriotism,” she added.

Sorry. No. That’s not the “free market,” because — okay, never mind, it’s clearly not worth it. You were saying? “What’s wrong with a private person offering a cash prize? If you vote, your name gets entered in a lottery. It’s the private market. It’s incentives. We believe in that right.”

Oh, wait, you mean…buying votes? Interesting. I’m pretty sure you’re the type to scream incessantly about “moneyed interests” in politics. But now you want private individuals to pay people to vote?

How about this: We should worry less about turnout and more about whether those who do vote actually understand what they are voting on.