Todd Grills Cruz on Immigration, Never Gets an Answer
VIDEO

Todd Grills Cruz on Immigration, Never Gets an Answer 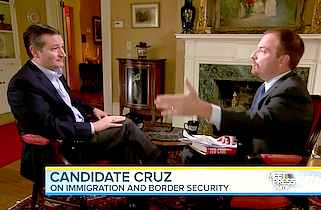 Meet the Press host Chuck Todd spent several minutes Sunday morning trying to extract an answer from Senator and 2016 candidate Ted Cruz (R-TX) about what the Donald Trump-saluter proposed doing with the 11 million undocumented immigrants in the country, and appeared very unhappy when he didn’t get one.

“It’s an interesting thing in Washington,” Cruz said the first time. “That is the question that both President Obama and Democrats love to focus on.”

“I don’t accept the premise that you have to solve every aspect of this problem all at once,” Cruz said the second time. “President Obama and the Democrats focus on that issue, because the question you’re asking is the most divisive partisan question in this entire debate. I don’t believe President Obama wants to solve this.”

“I understand that it’s divisive,” Todd said. “But it’s still a problem!”

“But you don’t have to solve every problem at once,” Cruz said.

“That’s fine,” Todd replied. “But explain how you do it.”

Cruz then criticized the amnesty negotiated under President Ronald Reagan. Todd pointed out that he still hadn’t answered what he planned to do with the 11 million.

“My view is first we secure the borders and solve the problem of illegal immigration and then I think we can have a conversation about what to do with the people who remain here,” Cruz said, his fourth attempt at answering. “I don’t think the American people will accept any solution until we demonstrate step number one, we can secure the border.”

“So anything’s on the table,” Todd asked, including deportation.

“I think we should secure the border around then have a conversation at that point,” Cruz replied, and Todd finally moved on.