Todd Grills Obama: How Do You Explain Deporting People to Save Senate Dems?
VIDEO

Todd Grills Obama: How Do You Explain Deporting People to Save Senate Dems? 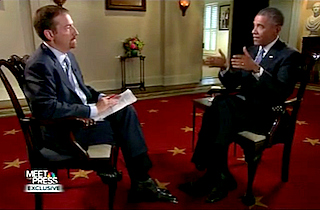 Chuck Todd landed President Barack Obama as his first guest on the renewed Meet the Press, and his thank you was the immigration version of “when did you stop beating your wife?”

Yesterday Obama announced that he would not consider an executive action on immigration until after the midterms, an announcement that calmed vulnerable Democratic Senate incumbents but angered immigration groups.

“What do you tell the person that’s going to get deported before the election, that this decision was essentially made in your hopes of saving a Democratic Senate?” Todd asked. “It looks like election year politics.”

“Well, that’s not the reason,” Obama replied. “I’m being honest now, about the politics. The politics of the unaccompanied children we saw a couple weeks ago, where you have from Central America a surge of kids showing up on the border, got a lot of attention and a lot of Americans started thinking that we’ve got this immigration problem on our hands. When I take executive action, I want to make sure it’s sustainable.”

“So if the public’s not behind you, you’re not taking it?” Todd asked. “That sounds a little like you’re concerned the public wouldn’t support what you did.”

“No, no, no,” Obama said. “I’m going to act because it’s the right thing for the country. But it’s going to more sustainable and more effective if the public understands what the facts are on immigration, what we’ve done on unaccompanied children, and why it’s necessary.”