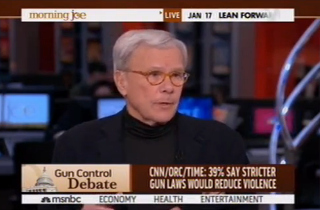 Appearing on MSNBC’s Morning Joe today, NBC’s veteran newsman Tom Brokaw called for a “holistic” approach to addressing gun violence, and said that remaining silent on the issue is akin to not speaking out during racial segregation in pre-civil rights America.

Brokaw explained to the Morning Joe panel that he believes all components of society must be reviewed in the wake of Sandy Hook, despite the fact that the gun lobby, the video game industry, and Hollywood will all claim it’s not their responsibility.

“It reminds me a lot of what happened in the South in the 1960s during the civil rights movement,” Brokaw explained. “Good people stayed in their houses and didn’t speak up when there was carnage in the streets and the total violation of a fundamental rights of African-Americans as they marched in Selma, and they let Bull Connor and the redneck elements of the South and the Klan take over their culture in effect and become of face of it. And now a lot of people who I know who grew up during that time have deep regrets about not speaking out.”

He continued: “There were a few brave souls who did and they were knocked down pretty hard within their own communities for coming out and speaking out in a moderate way, not even in a liberal way about the right of African-Americans to be able to vote, for example, and to walk into any restaurant they wanted to. But there was a lot of silence at the time. Now it’s time for the people who do have strong feelings, who are feeling that they can’t do anything about it, to kind of band together and have something to say here.”