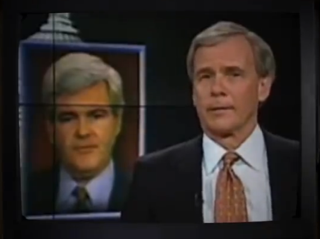 The Mitt Romney campaign released a scathingly simple ad today attacking Newt Gingrich— a simple, unadulterated news report by Tom Brokaw detailing his fall into disgrace. Now both Brokaw and NBC News are calling for the removal of the ad, the former noting he is “extremely uncomfortable” with his presence in the ad.

RELATED: Mike Huckabee: Gingrich Ad Starring Me Is ‘Disapproved Use Of Copyrighted Material’

Politico notes that Brokaw himself released a statement, saying he was “extremely uncomfortable with the extended use of my personal image in this political ad. I do no [sic] want my role as a journalist compromised for political gain by any campaign.” In the meantime, NBC News has released its own statement on what it intends to do about this:

“The NBC Legal Department has written a letter to the campaign asking for the removal of all NBC News material from their campaign ads,” NBC News said in a statement, which added, “Similar requests have gone out to other campaigns that have inappropriately used Nightly News, Meet the Press, Today and MSNBC material.”

Given that much of what is used in campaign ads are statements that candidates make on television shows, the impact of NBC winning these legal battles– perhaps not something like the Brokaw ad that does not actually build upon the clip, but other ads that use rather than display without comment– on what campaign ads look like could be massive. That said, for journalism purposes, fair use requires an application rather than mere repurposing of material, so there may be a very good case here. The ad is still up on Mitt Romney’s site here, and you can watch below:


Update: The Romney camp tells Politico it is “reviewing” the claim, but considered the clip to fall under fair use:

Eric Fehrnstrom, Mitt Romney’s senior adviser, told reporters after a rally in Panama City, Fla., that the campaign has received NBC’s letter complaining about its recent ad featuring a 1997 broadcast but does not intend to take it down.

“We just received the letter. We are reviewing it. But we believe it falls within fair use,” Fehrnstrom said. “We didn’t take the entire broadcast, we just took the first 30 seconds of it.”