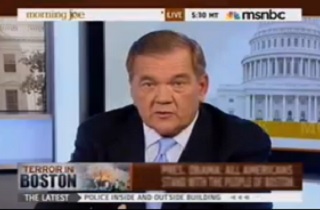 On Tuesday morning’s Morning Joe, former Secretary of Homeland Security Tom Ridge walked back comments he made, in the hours after Monday’s bombings of the Boston Marathon, that the evidence suggested a “coordinated attack” that was “perhaps associated with a broader international jihadist organization.”

Co-host Mika Brzezinski asked Ridge about those comments, which he admitted were based on facts that have now changed, and concluded that “perhaps I shouldn’t jump to conclusions based on what has been reported because it’s not as factual as I thought it had been.”

Mika said, to Ridge, “You might have said the more you hear about this bombing, the more you think it might have been a coordinated attack,” and asked “Does that still stand? And if so, why?”

“Well,” Ridge responded, “I think it’s an interesting observation that I made, and you challenging that this morning. I think it’s fair to say with various reports, I think the interpretation, based on my experience, has changed.”

He explained that when he made that assessment, the reporting on the incident suggested there were multiple undetonated devices found, “…but the ideas I had evolve and continue to evolve. They’re not the five exploded devices, and things have changed dramatically.”

“It speaks to a broader point,” Ridge continued. “We won’t not know who is responsible – we will not have all the details until the investigation is finished. And leads me to believe that perhaps I shouldn’t jump to conclusions based on what has been reported because it’s not as factual as I thought it had been.”

“Fair enough, fair enough,” Mika said. “And we’ll be careful too, obviously it’s better to wait for all the information to come out.”

Ridge also referenced President Obama‘s remarks Monday night, and added that “I think the cautionary remark that the President made about not jumping to conclusions,” then promptly ignored it once again.

“It clearly seems to me, and I still believe it was a terrorist attack,” Ridge continued. “We don’t know whether it was a domestic terrorist, connected to an international organization, multiple devices designed with an anti-personnel, designed to maim, designed to bring the kind of destruction, as somebody referred to earlier in your program, that you often see in battlefields, with improvised explosive devices in Afghanistan and Iraq. In my judgment, it’s a terrorist attack. The source of it remains to be determined.”

Here’s the problem with this sort of analysis: the notion that the bombings yesterday were a “terrorist attack” may well be a very good guess, but it’s still just a guess at this point, and nothing that Ridge cited precludes a lone attack by an apolitical actor. His description of the bomb fits the definition of pretty much every bomb ever used in an attack like this; any homemade bomb can be considered an Improvised Explosive Device. What bomb isn’t designed to hurt people?

While it’s true that IEDs were used in Iraq and Afghanistan, there’s no evidence to suggest that the bombs used on Monday were in any way similar to those. This is not to pick on Ridge, though; many TV analysts have used that description, which suggests a factual leap that isn’t yet supported by evidence. The IEDs used in Iraq and Afghanistan were characterized by the use of components from other military explosives and hardware, and were far more sophisticated than the current evidence suggests the Boston bombs were.

What makes Ridge’s assessment strange is that he literally just got finished saying we shouldn’t jump to conclusions, before making several more such leaps. There’s nothing wrong with people like Ridge bringing their expertise to bear on available facts, but they ought to consider the full range of conclusions, especially right after they warn about jumping to conclusions. There may be some nominal value in being the first person to guess right, but it would seem to be outweighed by the detrimental effects of too many bad guesses.