Tommy Christopher: Blaming Gun Violence On Video Games Like ‘Checking The Wiring In Your House While It’s On Fire’
VIDEO

Tommy Christopher: Blaming Gun Violence On Video Games Like ‘Checking The Wiring In Your House While It’s On Fire’ 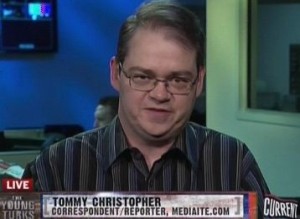 Mediaite‘s own Tommy Christopher appeared on Current TV’s The Young Turks tonight to discuss his recent column about a popular anti-violent-video-game study that actually concludes guns are to blame.

Christopher explained that in the study referenced by Morning Joe and other news programs, “the effects that they found are short-term aggressive behaviors” but that “there were all kinds of flaws in the research, the samples were too small.” But most importantly, the study states that there are “six other things that are way more important when it comes to aggressive behavior than video games, and one of them is access to guns.”

After quoting the flaws in other similar studies, Christopher told Uygur, “I went into this with an open mind, because I’m a parent. And I come away from it less worried than I was before, but I say let’s study it. But let’s not pretend that this is in the same ballpark as access to guns. To me, this is like checking the wiring in yout house while it’s on fire.”

Ultimately, Christopher’s conclusion at the end of the segment was “If we’re really worried about the effects these games have on the kids, then the last thing we’d want them to have access to is these video games and guns.”

Watch video below, via Current: