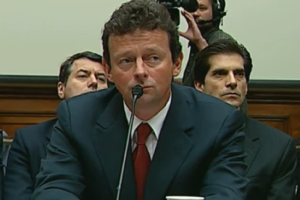 Texas Rep. Joe Barton used up his opening statement at today’s BP hearings to make a apology to CEO Tony Hayward for the Obama administration’s “$20 billion shakedown.” As the possibility was, at best, questionable, Iowa Democrat Bruce Baley took the question to Hayward himself: “Do you think BP was shaken down by the Obama administration to come up with this $20 billion compensation fund?” Hayward replied with a strange choking noise and a standard non-answer.

Instead of answering with a yes or no, Hayward summed up the events of yesterday in response: “We attended the White House at the invitation of the government to form a way forward and try to work together to deal with the leak, the response to the leak, and to return the Gulf Coast to its past, and that’s what we’re going to do.”

Just in case he didn’t quite understand the question, Baley went through a lengthy explanation of the American definition of the term “shake down” in case Hayward thought he was referring to some kooky Briticism or another; as Baley put it, “we speak the same language, but it’s not always the same language.” After being briefed in detail on what Rep. Barton’s comments meant, Hayward replied with the exact same answer: “as I said, we came together to figure out a way of working together to resolve what is clearly a very, very serious situation.”

When it became clear the “shake down” phrasing was not going to get a straight answer from the CEO, Baley finally asked if he thought the escrow account was a “slush fund,” to which he received a simple “no” from Hayward.