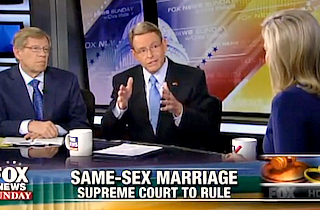 SCOTUS announced this week it will take up the issue after several federal appellate decisions overturning states’ bans on same-sex marriage. The two last sparred on FNS after that slew of appellate decisions effectively legalized the practice in up to 36 states.

Perkins cited the passage of those bans as evidence for gay marriage’s unpopularity, ignoring the historically dramatic shift in public opinion on same-sex marriage, which now enjoys majority support. “This is not how we reach broad national consensus on this,” Perkins said, referencing the continued fight over Roe v. Wade as an example of the Supreme Court failing to definitively decide an issue via judicial fiat.

“The Supreme Court of the United States, 15 times over the last 120 years, has said that marriage is a fundamental right,” Olsen responded, also pointing out that numerous states had decided via ballot or legislature to legalize the practice. “Never once in any of those cases did it say it had to be between a man and woman. 15 times it said it was a matter of privacy, liberty, association, dignity and respect for the individual. That’s what the constitution’s all about.”

Perkins rejected any comparison to the overturning of the ban on interracial marriage. “It’s a specious argument,” Perkins said. “There you had a man-made barrier keeping the races apart. Here you have judges attacking a natural bridge bringing the sexes together.” He then cited a story in from New York Magazine about an 18-year-old woman who wants to marry her father.

“Are you all of a sudden interested in what you read in New York Magazine?” Olsen asked.

Speaking of which, watch the clip below, via Fox News: