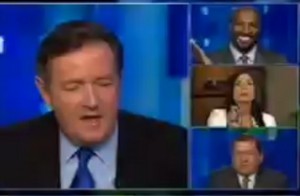 Michael Moore sat down with Piers Morgan tonight to react to the assault weapons ban dying quietly in the Senate without even being brought to a floor vote and how much influence the NRA has over members of Congress. Moore was particularly critical of Senate Majority Leader Harry Reid for letting the assault weapons ban go without even being voted on, remarking that if a crazed gunman killed Reid’s grandchildren, he would not be so willing to let the ban die in the Senate.

Moore railed against the power of the NRA, with Morgan saying that “the majority is being out-shouted and out-gunned” by the NRA. When Morgan brought up how Reid dropped the assault weapons ban, Moore got even angrier, encouraging anyone watching to e-mail Reid’s office to demand that it be put back in. He said Republicans should be put on the spot and “forced to vote on this.”

Morgan brought up Rob Portman‘s gay marriage reversal coming from his own son being gay, and couldn’t help but wonder how much the debate would change if there were members of Congress whose children were victims of gun violence. Moore was a lot more graphic in his assessment.

“If a man with an assault weapon goes in to the school where Harry Reid’s grandchildren go to school tomorrow and kills his grandchildren, would he go in front of his microphone at 5:00 and say, ‘I know how Dianne [Feinstein] had to witness the mayor getting murdered, and I just–my grandchildren just got killed today, but, you know, we can’t get it passed ’cause we just don’t have the votes.”