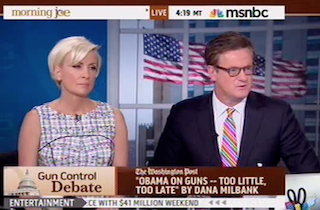 Morning Joe started the week off with a gun control discussion, noting that there are now five Republican senators who have said they’ll filibuster any legislation on the issue. Questioning the progress (or lack thereof) Washington has made since Newtown, the panel took on background checks specifically — going to ask, did President Obama miss his chance?

The stage for the segment was set with a nod to Dana Milibank‘s op-ed in the Washington Post, arguing that Obama’s actions on the issue now are “too little, too late.” Wrote Milibank:

Obama’s failure to strike while the iron was hot offers a lesson in presidential leadership that goes beyond gun control. On almost every topic, from budget negotiations to national security, Washington seems only to act these days in response to crisis, if it acts at all. Obama erred in trying to use Newtown to build support for his positions on taxes, energy and immigration. And he compounded the error by sending Joe Biden off to conduct a study — an unnecessary delay when solutions were obvious. Once the president took his foot off the accelerator, no other action — not even Michael Bloomberg’s ad campaign — could maintain the momentum.

Joe Scarborough and Mark Halperin attempted to decipher where the lawmakers are on a deal, with the former noting that it appears a deal on background checks may be dead. Getting anything through the House will be tough, Halperin noted, but “you still hear from a lot of Republicans they would like to do something.” Basically, he asserted, the Democrats need a “Republican partner” — a point Harold Ford, Jr. agreed with.

Not willing to go as far as Milibank, Ford did go on to note that it’s “unfortunate” that we’re in April and still haven’t passed anything on gun control. On the flip side, Andrea Mitchell noted that some on the pro-gun control side will feel that simply passing background checks is not enough when there’s no progress on other fronts like an assault weapons ban.

“Harry Reid is moving on what he thinks they can do,” she added. “It is disappointing to the advocacy, no question about it…but I think the best they’re going to get is background checks and the straw purchases.”