Top RNC Official ‘Doubts’ There Will Be Another ‘Undercard’ Debate
video

Top RNC Official ‘Doubts’ There Will Be Another ‘Undercard’ Debate 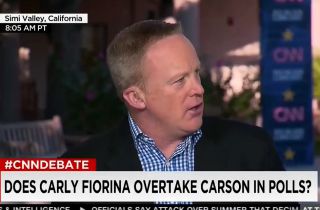 A top Republican National Committee official suggested on Thursday that there might not be any more so-called “undercard” debates for lower-tier GOP candidates.

Given the unprecedented size of the Republican presidential field this cycle, Fox News and CNN — the two networks that have hosted primary debates so far — decided to develop polling methods to allow only top-tier candidates into the primetime debate, and relegate lower-polling candidates to a separate debate that takes place earlier in the day.

Asked on CNN Thursday morning if he believes that there will still be 15 candidates eligible to participate in the next GOP debate in Colorado on Oct. 28, RNC Chief Strategist and Communications Director Sean Spicer said he doubts that an undercard debate will even be needed.

Spicer added that CNBC, the host of the next debate, has yet to reveal its criteria, and said the RNC will be working closely with the network to make a decision that is “best for the party” and “best for the candidates.”

“We’ve got to look and see where we are, it’s six weeks from now,” Spicer said. “There’s a point at which — you saw last week Gov. [Rick] Perry dropped out — you start getting that undercard that soon turns into an interview.”

Asked by John Berman if the RNC would consider not inviting certain candidates to the next debate if the field is still as large as it is today, Spicer would not answer directly because the specific criteria has not yet been agreed upon.

Regarding Wednesday night’s primetime debate, which featured 11 candidates and lasted three hours, Spicer said it “looked like a pretty crowded stage … but we had plenty of time for everyone to get their position across, so that was good.”