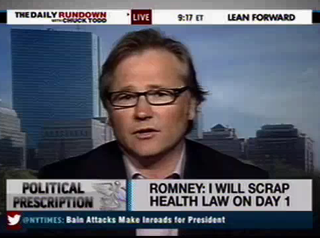 After Chief Justice John Roberts handed down his ruling that the individual mandate requirement in the Affordable Care Act fell under Congress’ power to tax, the question of whether Republicans were taking advantage of calling it a tax or insisting the ruling was wrong to call it that has continued into today, when senior Mitt Romney adviser Eric Fehrnstrom insisted the mandate, according to the candidate, was not a tax, and that he disagreed with the Court’s ruling calling it such.

RELATED: Andrea Mitchell To Romney Adviser: How Big Of Deal Will ‘You People’ Make Of Obama’s Private Sector Gaffe

On today’s Daily Rundown, host Chuck Todd asked the question with Romney’s mandate in Massachusetts rather than the national version of that, asking whether they called the fine a tax or a penalty when passed in the state. “Let me say that when the Supreme Court ruling came down last week… Governor Romney went before the cameras and said he disagreed with the ruling,” Fehrnstrom replied, arguing that “President Obama’s position is contradictory and unstable.” Todd asked again whether the penalty was talked about as a penalty or a tax, and Fehrnstrom explained that “what we did in Massachusetts works for Massachusetts” and was “never meant to be a one size fits all plan for the entire nation.”

Todd played a few clips of Romney calling the mandate a “tax penalty,” which was a confusing way of putting it for the purposes of this discussion. “What we put in place in Massachusetts is a penalty and [Romney] disagrees with the Court’s ruling that it is a tax,” Fehrnstrom concluded.

The statements, given that many Republicans reacted to the ruling claiming the penalty was a tax all along, adds another layer of complexity to the debate against both the health care ruling and the mandate particularly.