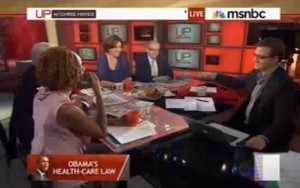 One of the great things about liberals, true liberals, is their capacity for compassion and sensitivity, a capacity that’s often discarded in the heat of political debate. On Sunday morning’s Up with Chris Hayes, that capacity was on display when panelist Norman Ornstein of the American Enterprise Institute (which is, unfortunately, not a safety school for patriotic Trekkies) told a fat joke about Rush Limbaugh, and host Chris Hayes stepped in to gently chide him.

The panel was discussing Limbaugh’s recent Pinky and the Brain-esque declaration that Obamacare is the “largest tax increase in the history of the world,” when Ornstein tossed out a one-liner worthy of Mr. Blackwell. Hayes, who, himself, was recently the recipient of more cheap shots than the entire cast and crew of Road House, defended Limbaugh, albeit quickly and gently:

Now, the liberal in me has nothing but empathy for decent human beings who struggle with weight, especially given the fact that had it not been for the loss of about a hundred extra pounds several years ago, I’d have been on track for an even earlier death than I’m currently on. Additionally, non-substantive attacks like this often end up saying more about the joke-teller than they do about the subject of the joke, and they really don’t have a place on a show like Up, which eschews cheap conflict in favor of more substantive, good-faith, organic debate.

Having said that, the comic in me only really cares if it’s funny. On that score, the greater problem with Ornstein’s crack is that it was ill-timed, occurring so long after the clip that Limbaugh’s shirt was no longer fresh in viewer’s minds, and unfunny. Also, while I don’t have empirical evidence to back this up, Rush seems to have lost a decent chunk of weight, and isn’t in horrible shape for a guy with such a sedentary job. Maybe he’s discovered the appetite-suppressant properties of listening to his own show.

If The Newsroom has taught us nothing else, it’s that journalists have a sacred duty to serve the public, and so it is my responsibility to make sure that if any future Up panelist is going to risk the mild disapproval of the host, they at least do so in service to a funny quip. To that end, here are the  Top Ten Cheap Shots At Rush Limbaugh For Chris Hayes To Disapprove Of: (for conservatives, most of these can be reworked into Michael Moore jokes, if you must. Just make sure you credit me.)