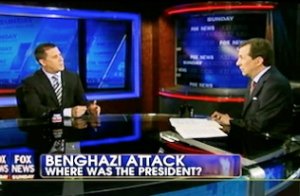 White House Senior Adviser Dan Pfeiffer made the Sunday show rounds this week, including a stop at Fox News Sunday, where Chris Wallace pressed him on the administration’s handling of and response to the Benghazi attack. Wallace persisted on the topic of the emails about the talking points in particular — but the two couldn’t manage to agree.

Wallace began by questioning Pfeiffer about what President Obama did the night of the attack and whether he was in the situation room — but Pfeiffer said Obama was kept updated, and didn’t provide specifics, contending that which room Obama was in is “a largely irrelevant fact.”

“Where is he while all this is going on?” Wallace asked. As Pfeiffer replied that “this has been testified to,” Wallace argued, “No. No one knows where he was or how he was involved.”

“The assertion from Republicans that somehow the president allowed this to happen or didn’t take action is offensive,” Pfeiffer stated. “There’s no evidence to support it.”

Pfeiffer’s response pointed to emails “doctored” by Republicans in an effort to “smear the president.” Wallace countered that his question was based on accurate emails, as Pfeiffer asserted that emails contradict GOP conspiracy theories. The pair clashed over the talking points’ mention of the attack being sparked by protests — whether in Cairo or over a video. Pfeiffer remained defensive, as Wallace concluding by agreeing to disagree.