Touré And S.E. Cupp Battle Over Whether Southerners Signing Secession Petitions Are Racist 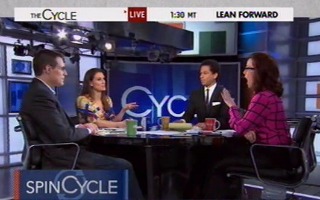 In a discussion on MSNBC’s The Cycle about the White House increasing the number of We The People petition signatures required to mandate a formal response, Touré said that he found the number of secessionist petitions emanating from Southern states to be especially revealing. He said he believed this stems from southerners who cannot stand to be governed by a black president. S.E. Cupp pounced on that remark saying that, while she finds secessionism to be offensive, she found Touré’s prejudicial remark to be just as offensive.

“The slew of secession petitions out of the south really interests me,” Touré said. “This idea that there are a lot of Southern people who want to have nothing to do with Obama’s America. And I don’t think you can say that there’s any policy that has changed America so much that…”

“That has not been enacted yet,” Touré replied. “I think they’re talking about, ‘we don’t want to be in a country run by a black man.’”

“That’s so offensive that you’re maligning an entire region of the country and injecting race into their psyches because they don’t like the polices of this president,” Cupp fired back.