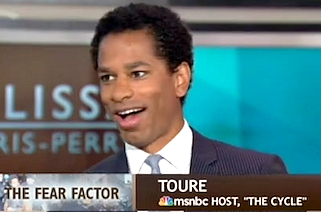 During a discussion on the Melissa Harris-Perry show of the much-rumored outbreak of violence following George Zimmerman’s possible acquittal Saturday morning, Touré argued that the predictions of race riots by Bill O’Reilly and others was another iteration of the same racial profiling that motivated Zimmerman to approach Trayvon Martin.

“There’s this expectation of violence from us,” Touré said, “which goes back to slavery, that we must keep them under control in any way possible. They are three-fifths of a human, they are animals, they might explode in violence at any moment…Violence in terms of riots have been used against the black community far more often throughout history than we have used it. So this idea that we’re just going to explode if we don’t get this verdict—that many of us don’t expect to go our way—is absurd and ahistorical and insulting.”

“This is racism,” Touré continued. “This expectation of violence. And this is what George Zimmerman applied to Trayvon Martin in the dark. Well, he surely will be violent! He is planning violence! He’s a burglar, he’s going to get us! I must stop him! And here, [Bill] O’Reilly and these other lunatics come in to say, all of you are the same.”

To Melissa Harris-Perry, the anger in the black community was not an innate twinge of violence but outrage over injustice. Referring to tweets highlighted by Alex Jones in which African Americans boasted of violence, Harris-Perry said, “These tweets are wrong, but it’s not a desire to riot that fueled these tweets, but rather a sense that justice will once again be denied.”

Perry then wondered if the expectation of violence cut both ways.

“I want all of my black male loved ones to stay inside after the verdict,” she said. “Not so much because I think they’re going to riot, but because if there’s this expectation laid across us out there, then they become vulnerable in public space, in just the same ways that Trayvon Martin was vulnerable walking home.”