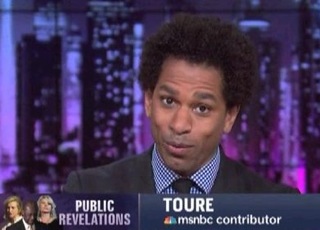 With a new woman, Karen Kraushaar, coming out today publicly to accuse Herman Cain of sexual harassment, Lawrence O’Donnell brought on MSNBC contributors Touré and Goldie Taylor to discuss today’s developments. Touré in particular noticed a pattern that may be developing with Kraushaar coming to the fore: all the women accusing Cain are white and blonde, which he argued feeds into an “instinctual fear” white men have of their women being accosted by black men.

RELATED: Touré Gives His Theory On Why Republicans Need Cain: ‘Cain Is Giving Comfort To Racists’

“I can’t go any further without pointing out that it’s yet another blonde white woman who is accusing him of doing and saying things that are inappropriate,” Touré told O’Donnell, noting that this was worth mentioning because “the instinctual fear in America of black men being sexually inappropriate or aggressive or dominating with white women is very, very deep.” He did believe that this would hurt the Cain campaign because “people start to feel this on a deep level: ‘He keeps going after our women– we don’t like this!'” However, Cain benefited, he concluded, from the fact that he was “the last stop before Romneyville,” and Republicans were very much not happy with the inevitability of nominating Romney.

Taylor disagreed, noting that sexual harassment was equally heinous despite what the women looked like and arguing race was not a factor. She also noted that the attacks on the accusers’ children, particularly from Rush Limbaugh, were out of bounds: “they are not fair game.”