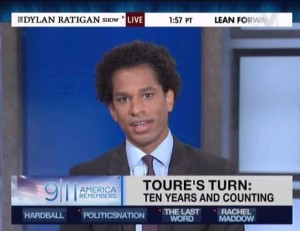 The media coverage this week (and coming weekend) that dutifully aims to commemorate the “fateful day” of 9/11 has, in many ways, ironically cheapened its memory, at least in the eyes of some. Don’t mean to offend, but the events of that day — in particular the lives lost — deserve a memorial somehow more befitting than that which is currently being served by the mainstream media. Of course, this my personal opinion, but I think MSNBC contributor Touré said it better than I could, at least on this issue. During an appearance on The Dylan Ratigan Show, Touré called out the 9/11 nostalgia in such a way as to literally move his host to a speechless moment of self-reflection that rarely seen on live television.

There is no question that 9/11 is a tough, tough subject to discuss. Or at least, it should be, in the eyes of many of New Yorkers who lived through it firsthand. But cable news isn’t exactly known for nuance or restraint, and if you’ve been watching any television this past week, you will have noticed the same ghastly imagery repeated so regularly that, yes, its meaning has been blunted, if not completely lost. This is an unforgivable action for those who still see that day in terms far beyond “selling soap. Yes, in defense of all cable news outlets, they are “giving the people what they want,” right?

Touré’s turn today was particularly jarring to Dylan Ratigan, who had just wrapped a one-hour show dedicated to the memory of, yup, 9/11. His pensive gaze and the speechless seconds that followed Touré’s essay were as fitting a tribute to the victims of 9/11 that I have seen on television this week thus far.

Watch for yourself in the clip below, courtesy of MSNBC: