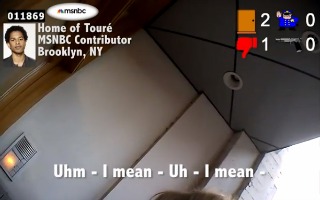 James O’Keefe, the undercover videographer behind Project Veritas, published a new video Tuesday in which his crew visits the homes of journalists who have published or defended the publishing of the names of local gun owners in New York and New Jersey. Pretending to be an anti-gun advocacy group, O’Keefe’s crew asks those journalists if they would display a sign which declares that their home is “proudly gun-free” – the journalists all declined.

One of the people that O’Keefe’s group met up with was MSNBC host Touré . Despite his advocacy for stricter gun laws and his defense of the outing of gun owners, Touré also refused to display the sign.

“I agree with you in terms of gun control,” Touré told O’Keefe’s faux-gun control activists.

“We can assume that you’re not a gun owner yourself,” an activist asked.

“What are the chances we can get something on this door,” another activist asked. “Something that just says, you know, ‘this building is proudly gun free?’”

“I’d have to talk to my neighbors,” Touré replied. “I honestly don’t know if they – what they feel on this issue.”

Touré protested the Project Veritas video on Twitter, saying that he treated the individuals who came to his home with nothing but respect.

O’Keefe responded by defending the public’s right to know whether Touré has a gun in his home or not.

Watch the clip below via Project Veritas: