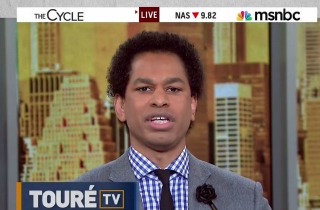 MSNBC host Touré tore into President Barack Obama over his announcement on Thursday of a program to address disproportional rates of poverty and crime among African-American youth. The MSNBC host insisted that Obama was misguided to focus on the family and “personal responsibility” as ways to address those issues. He insisted “structural racism” was to blame for crime and poverty in the African-American community.

Touré began by praising the president for speaking to black youths in a way “only a black president could.” However, he said he was “depressed” by Obama’s outreach because even he would be unable to address many of the problems facing the black community.

“But when the president speaks to the black community, there’s often a dive into the politics of personal responsibility,” he continued. “I cringe at that, as if effort and excuses have been the problem.”

“The accumulated impact of historic discrimination and the advantages of white privilege and the systems perpetuate all that,” he continued. “Going into personal responsibility suggests you can make it if you try, and he knows it’s more complex than that.”

“I want our president this president, to tell America to tear down the American Berlin Wall that keeps black men separated from opportunity,” Touré concluded. “That sort of big brother-in-chief would get us closer to the mountain top.”