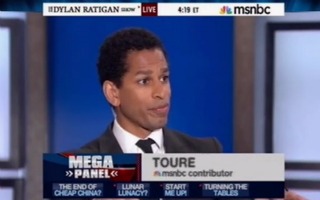 Ratigan asked his panelists, some with preschool-aged children, whether this was a good idea. Touré immediately chimed in and took the position that these institutions were, in fact, important.

“It’s easy for us to go, ‘oh these kids have easy lives. They don’t have mortgages,” said Touré.

Ratigan asked ironically, “what happened to the world where the kids worked for the adults? Go clean the house.”

“They have stresses of their own,” said Touré. “Namely, they don’t have any control over their lives.”

Ratigan responded that, historically speaking, modern day children enjoy better living circumstances than any previous generation. “That it was worse in the past than it is now is irrelevant,” said Touré. “All these children know is I live basically in a police state where there are these two people who are there all the time – generally there to make me happy – sometimes they say ‘I have to eat, I have to go to bed, I have to do this, I have to do that. So, their lives are constantly stressful.”

When Ratigan asked if Touré supported the idea of toddler spas, yes or no, Touré responded “yes.”

MSNBC contributor Krystal Ball, a mother of a four-year-old child, said she agreed with Touré that children were stressed but that a spa is generally not the best way to address that problem.

Touré jumped back into the conversation, saying “some of the stress that our children deal with is basically beyond their control.”

“They’re dealing with a bunch of other young people their age who are, for lack of a better term, insane,” said Touré. “They get bit by another kid because they touched their toy. We can’t control that, we can’t modulate that. They need a massage.”