Touré Gives His Theory On Why Republicans Need Cain: ‘Cain Is Giving Comfort To Racists’ 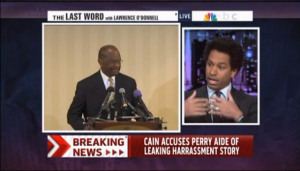 On The Last Word, host Lawrence O’Donnell said that Herman Cain may be making the rounds on Fox News shows, but he has less to say about the harassment allegations against him when up against “real reporters.” He brought on Touré to discuss Cain’s recent revelation to Georgia Republicans that a forthcoming report would vindicate and absolve him of the allegations against him, although the discussion veered towards the topic of Cain’s special “role” within his party.

O’Donnell referenced his favorite media figure, Donald Trump, saying that Cain’s report would come out when Trump’s Hawaii-based research into Obama’s birth certificate does. “I would not be holding our breath,” said Touré:

We don’t see them dealing with this in a forthright way at all; it’s certainly not a presidential way. It’s not even really a professional way to deal with it, as a politician. But this is a major moment for the GOP because Cain is a really important candidate, perhaps more important than any of the other candidates because he serves a massive psychological purpose. Because there’s a lot of people in the GOP who’ve been critical of Obama and have been made to feel that they are racist because of their criticism. Some of it has been racist, some of it has been reasonable, some of it has been business as usual Republican/Democrat stuff. Ok. Cain comes along, offering salvation, liberation. You’re not racist if you support Herman Cain. So now they have this Herman Cain card they can throw at us any time they are made to feel racist. So this is like a beautiful thing for them. So they need him to succeed as long as they can deal with him so that they can get their Cain card and make it as valuable as possible.

But this whole mode of thinking is a canard, Touré added, because Cain ends up, essentially, “giving comfort to racists.”