Touré Goes Off On Fox News: ‘I Wonder If There Are Elves That Come Up With The Facts Over There’ 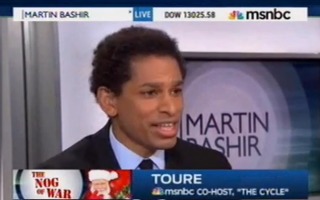 After a day in which MSNBC host Touré has been engaged in an ongoing feud with Fox News Channel’s contributor Kirsten Powers, Touré fired a salvo back at the cable news network where she is a contributor. On Friday afternoon, Touré went off on the Fox News Channel in a discussion about the networks’ anchors’ focus on the theme of the “war on Christmas,” which posits that elected officials are engaged in an effort to deemphasize the holiday’s more religious aspects and focus on its secular appeal. Touré said he found it hard to understand “how they think” at Fox News, and wondered if “elves come up with the facts over there.”

Bashir asked Touré if he agreed with Chafee’s suggestion that the “War on Christmas” is not real and amounts to Fox hosts being hypersensitive to political correctness. “What is Mr. Chafee smoking? I thought it is a real war,” Bashir asked sarcastically.

Touré said that he preferred to say “Merry Christmas” over the preferred PC holiday greeting, ‘Happy Holidays.” However, he found the concept of a “War on Christmas” to be bizarre.

“Facts don’t live in the alternate reality bubble,” Touré added. “Sometimes I find it difficult to understand how they think over there. I mean, you watch that network and – I wonder if there are elves that come up with the facts over there, because I’m like, ‘where do you get these things?’ I mean, its constant head scratching territory.”