Touré On Geraldo Rivera’s Senate Bid: He ‘Is A Joke,’ Has Been A ‘Punch Line’ For ’20-Some Years’
video

Touré On Geraldo Rivera’s Senate Bid: He ‘Is A Joke,’ Has Been A ‘Punch Line’ For ’20-Some Years’ 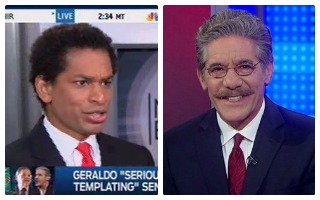 During an appearance on Martin Bashir’s MSNBC program, The Cycle co-host Touré tore into the notion that Fox News Channel host Geraldo Rivera could be taken seriously as a Republican candidate for Senate in New Jersey. Touré called Rivera a “joke” and a “punch line,” and added that Rivera’s moderate social values are not compatible with the present Republican Party.

RELATED: Geraldo Wants To Lead ‘A New Vitalization Of The Republican Party’ As NJ Senate Candidate

“Geraldo Rivera is a joke,” Touré said bluntly when asked about his electoral prospects. “Especially going to a serious political context – a total joke.”

“Pro-immigration, pro-marriage equality, pro-choice – that doesn’t sound like a Republican to me at all,” Touré continued. He said he did not think Rivera could even generate support for his potential candidacy given his generally liberal social values.

The Cycle co-host Krystal Ball disagreed, saying that she hoped that Rivera would run in 2014. She noted that it would be good for the GOP to embrace diverse candidates with a broad array of social values.

Touré countered by saying that Rivera would not be the voice that “turned the party around” on issues like gay marriage and abortion rights. “It’s a sideshow,” he concluded.