Touré On GOP’s Immigration Debate: ‘Just Lining Up For Who’s Going to Lose To Hillary’ 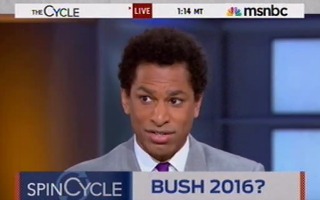 MSNBC host Touré weighed in on the ongoing internal debate the GOP is having regarding immigration reform. He commented on the immigration reform proposals of Republican politicians like former Florida Gov. Jeb Bush and Florida Sen. Marco Rubio (R-FL), but said that he still detects a note of hostility as politicians vie to craft a proposal that still blocks illegal immigrants from achieving full citizenship. Touré said that, as long as Republican politicians indulge the impulse to appease the party’s right on immigration, their potential 2016 candidates are “just lining up for who’s going to lose to Hillary [Clinton].”

“This whole moment seems a bit embarrassing,” Touré observed. “It doesn’t make him look bold, or smart, or authoritative.”

“It reveals that he’s got a lot of anxiety about what’s coming from his right,” he continued. “He’s not worried about Hillary, he’s worried about Rubio.” Touré noted that he should be worried about Rubio, and cited polling data that shows Rubio leading the GOP 2016 pack among Republican primary voters.