Touré On The Death Penalty: This Week, America Was ‘The World’s Moral Laggard’ 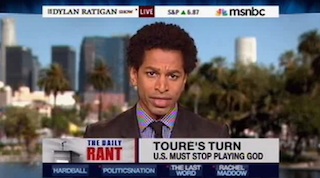 The past few weeks, the debate over the death penalty has rocketed back into the forefront of the public consciousness starting with the cheering at a GOP debate and culminating with the outcry over the execution of Troy Davis. Today, Touré focused his segment on The Dylan Ratigan Show and came out clearly against capital punishment. He began by saying that, while he was almost always proud of his country, this past week was not one of those times.

Touré discussed the Davis case, with its lack of DNA evidence and witness recantations, and compared it to the other execution in the past few days, that of Lawrence Brewer, a white supremacist who has been unrepentant about his 1998 torture and murder of a black man. Touré pointed out that, while it may seem that Brewer would be a perfect candidate for execution, he didn’t think either man should have been killed by the state.

“The way a nation treats its prisoners, says much about who it is. America is one of the last nations in the world to still employ the death penalty even though it cripples our status as a world moral leader and is barbaric and is not uniformly applied and is subject to bias and is rife with error and sometimes leads to the execution of people we’re not completely certain actually committed the crime. How could that happen? We’re just human and we need to end the death penalty and get out of the business of playing God.”

Ratigan said he “agreed completely” with Touré’s point and that the issue was with “that bloodlust crowd and the bloodlust politics.”

So, what do you all think of Touré’s argument? It’s a debate that brings up a lot of passion (quite possibly for evolutionary reasons).

Of course, that doesn’t mean things need to get mean in our comments section! Right?