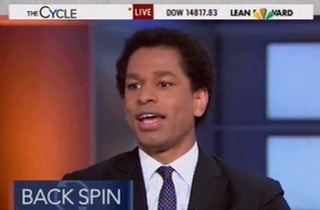 MSNBC host Touré tore into both artists LL Cool J and Brad Paisley over the release of their lighthearted duet “Accidental Racist,” which tackled persistent racial tensions through song. Touré, an experienced music critic as well as an outspoken expert on race relations, found no redeeming value in their song.

Co-host S.E. Cupp said that she could “appreciate” the effort made by both artists in the effort to cool racial tensions though verse. “I like the effort… maybe,” Cupp said waveringly.

“Okay,” Touré interjected. “No, I’m not giving out any good grades for the effort.”

“I hate it,” he continued. He said Paisley could not tell his audience to ignore the “dominant meaning” behind the Confederate flag. “No, you can’t just re-appropriate the symbol as you wish,” Touré added. “If you wear that out in public, as LL says in his verse, you’re going to make me uncomfortable.”

“It’d be very easy for me to spend the rest of my time beating up on Brad Paisley’s show of white guilt,” Touré pivoted, “but I don’t want to do that straw man – I want to talk to LL who I am extraordinarily disappointed in.”

Touré slammed Cool J over the lyric in his song, “If you forget the gold chains, I’ll forget the iron chains.”

“Completely false choice,” Touré said. “If you don’t judge me because I’m wearing a chain, I’ll forget about slaver? Which continues to have an impact on this country – the racial disparity, the income inequality, the incarceration trends. No, I’m not going to forget.”

“My God, LL Cool J talking about ‘forget the slavery mentality?’” Touré exclaimed. “Mama should knock you out!”