Touré Tears Into Antonin Scalia Over ‘Racial Entitlement’ Argument: This ‘Is Completely Racist’ 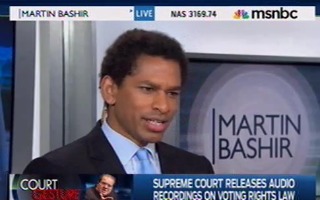 MSNBC host Touréjoined Martin Bashir on Friday where he severely scolded Supreme Court Justice Antonin Scalia for arguing from the bench of the Court against the Voting Rights Act and calling the effect of that legislation a “racial entitlement.” Touré found the argument Scalia advanced highly offensive and called the language he used “completely racist.”

“I don’t think that’s attributable to the fact that it is so much clearer now that we need this. I think it’s attributable – very likely attributable – to a phenomenon that is called perpetuation of racial entitlement,” Scalia said in Supreme Court arguments about the constitutionality of portions of the VRA. “It’s been written about. Whenever a society adopts racial entitlements, it is very difficult to get out of them through the normal political process.”

Bashir accused the Supreme Court justice of delivering a political speech from the bench. Touré agreed and said that the Court has become more politicized in recent years, even becoming the equivalent of a second Congress.

“We have these shenanigans happening all the time,” he continued. “And protecting them is an entitlement? So, you’re giving us the right to vote, as if we were the takers in this game of makers and takers?”

“That whole language is completely racist,” Touré observed. “And, this idea that, ‘white people work hard and then they give their money to lazy black people.”