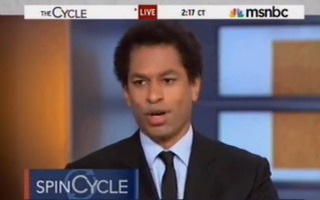 Cohost of MSNBC’s The Cycle, Touré, trashed Barbara Walters over her line of questioning when recently interviewing Gov. Chris Christie (R-NJ) and Secretary of State Hillary Clinton. Touré found Walters asking Clinton about her hair, while in the next breath noting that such a question is inherently sexist, to be “embarrassing” and a “dereliction of duty.”

Touré took issue with a clip of Walters asking Clinton about her evolving hair style, and qualifying the question by saying “nobody asks men that.”

“That moment about the hair, and to the fat question of Christie too; embarrassing,” Touré said. “Dereliction of duty. What are you talking about, Barbara?”

Touré wondered how Walters could land the opportunity to interview two of the most powerful politicians in the country and find questions about their weight and hair style to be appropriate.

“This is the kind of media hurdle that serious women have to go through,” Touré added. “Here is an example of sexism inflicted on another woman by a woman.”

“Barbra goes on to say ‘you would never ask a man that.’ So, why are you asking her that,” Touré said with exasperation. “Do you even recognize the sexism that you’re activating and commenting on? No you don’t.”