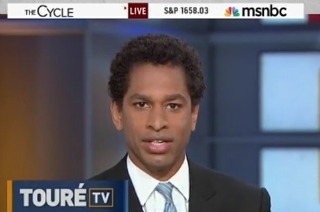 In the punditry game, compelling and unique points of view are currency. MSNBC host, columnist, and author Touré is among the best at articulating provocative and compelling points of view. Rarely do I find myself agreeing with him (though it has happened on more than one occasion), but I almost never find myself thinking that he has posited a thought that has little or no constructive value. This is one of those times.

On Monday, Touré excoriated conservatives – though he was not talking about conservatives, per se, but merely those who disagree with the assertions he was about to make – who have insisted that characterizing the murders of Delbert Barton and Chris Lane by primarily African-American teenagers represents the other side of the racial coin. Touré added that this “vile” tactic employed by conservatives is an effort to hijack and “damage the conversation” on race. This statement must be met with protest: conversations take place between two parties of relatively equal standing. What Touré appears to be advocating for is a one-sided lecture on race.

Touré opened his Monday monologue with a correct assertion: there is nothing beyond circumstantial evidence that suggests the murders of Barton and Lane had anything to do with race. He is also right that it is misguided for some conservatives to see these murders as an opportunity to score political points against a media which credulously reported that there was a racial element to the killing of Trayvon Martin by George Zimmerman.

RELATED: Fox’s Kirsten Powers: Does Jesse Jackson Have to Comment on Every Crime in the Country Now?

On Fox News Watch, Daily Beast columnist and Fox News Channel contributor Kirsten Powers correctly chided conservatives for calling on America’s civil rights leaders to speak out about the murders of Lane and Barton. “Do we now expect Jesse Jackson to comment on every single heinous crime that happens in the country?” she asked.

Touré cited Powers’ objections to attack conservatives, and the Republican Party (linked, though not synonymous), for adopting a “vile new tactic.” That is, to invoke Belton and Lane to engage in “signal jamming” to confuse and disrupt the sacrosanct “conversation on race.”

However, Touré continues to insist that a racial injustice was done to Martin because “the justice system” “shrugged” when the body they found face down in a Florida yard on that February night was black. This is as hazardous an example of grievance-mongering as that done by conservatives seeking to add to the “national scoreboard,” as Touré puts it.

He says that conservatives are, by and large, ignoring the crime statistics which show that white-on-white crime is far more prevalent than black-on-white crime. This is simply nonsense. In the wake of the Zimmerman verdict, conservatives, incensed with the media’s credulous coverage of the supposed racial angle in that case, ceasesly cited FBI crime statistics to show how relatively rare interracial violence is and how the media sensationalized Martin’s killing.

Touré goes on to outright insist the conservative movement needs, for untold reasons, to portray black people as violent in order to fulfill a narrative. Further, he says that the comparisons between Lane and Barton and Martin are misplaced because the case against Zimmerman was inactive before a national campaign forced the state of Florida to hastely charge Zimmerman without submitting eveidence to a grand jury.

Touré knows that Florida police were prohibited by law from charging Zimmerman on the spot by virtue of his ability to point to physical evidence of his altercation with Martin as prima facie proof that he had acted in self-defense. But let’s presuppose that Florida was never going to ever build a case against Zimmerman, and that he was charged and arrested only as the result of activism. What are the fruits of that agitation?

Zimmerman was arrested, tried and convicted in the media, only to be acquitted by a jury. An FBI probe into Zimmerman’s background was unable to produce any evidence that he harbored racial animus towards African-Americans. The evidence of racism was so thin, in fact, only Zimmerman’s defense even introduced the notion that anyone was profiled on the night Martin was shot – the prosecution refused to inject that notion into the case because they could not prove it. The Department of Justice would love nothing more than to bring charges against Zimmerman for violating Martin’s civil rights. They are highly unlikely to do so. The evidentiary burden is simply too onerous.

So what is left is the faith-based assertion, an unfalsifiable claim, that a racial factor of some kind prompted Zimmerman to shot Martin. This is quite simply subjective.

Finally, Touré suggests that Chris Lane, the Australian exchange student who was shot in the back while jogging for no discernible reason, “will not be on trial” in the same way Martin was. Had Lane been involved in an altercation with the three teens which allegedly killed him, and those teens were preparing to mount a legal defense based on the claim that they feared for their lives, he most certainly would be. In that event, Lane’s background would be pertinent to the case whereas, having been shot from behind at range, it is not.

Touré then goes on to cite the myth of Richard Nixon’s 1968 “Southern Strategy.” That dogma suggests that Richard Nixon managed to out-racialize an actual racist, Gov. George Wallace, but yet somehow lost most of the Deep South. In spite of this self-evident failure, the racism of the “Southern Strategy” has tainted Republican thinking forever. This, too, is nonsense based on a misreading – or a misquoting – of the Nixon’s 1968 campaign team.

In fact, Touré says that the GOP has engaged in a subtle racial campaign in which “guns, the welfare state, voting rights, immigration” all represent the front lines. It would be faster to list the areas of public debate which do not have a subtle racial element in Touré’s view.

The MSNBC host suggests he is interested in a healthy, productive racial conversation, but goes on to suggest in commentaries like this that he does not often have them with anyone who disagrees. The conversation is not being damaged, it is being engaged. If Touré welcomes that conversation, then he would also welcome debate and refrain from impugning the motives of those who engage him directly. If slaying straw men are all he is interested in, then should continue to broadcast commentaries like this one.