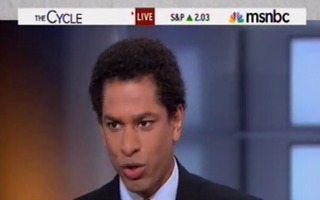 Perhaps it is the pending holidays that made them do it. Believe me, I feel the unholy drag on my motivation which often precedes December’s Saturnalian festivities. I’m attributing this affliction to MSNBC host Touré (and, to a lesser extent, Steve Kornacki) who took the easy way out on Monday when he blamed the two Australian DJs – and the culture of talk radio in general – for their successful prank call to a London hospital where the Duchess of Cambridge was recovering, and the horrific circumstances surrounding the death of the nurse who took the DJs’ call. This is a tragedy, not an atrocity meriting redress or even condemnation. To demand someone be held responsible for this heartbreaking incident is to indulge in a selfish instinct to place oneself on the “right” side of an issue that is unfortunately ambiguous. There is, however, real damage that can be done by that kind of moralization.

In a segment on the DJs actions, and their tearful interview on the subject with Australian television, Kornacki says that this incident could have happened in a number of countries including the United States.

Actually, that’s highly unlikely given the nature of one-party consent laws in most of the states of the Union. Broadcasters are now obligated to inform the subject of a potential prank call that they are being recorded as they can no longer be live – by virtue of this disclosure, the prank is essentially over before it begins. Live prank calls of the variety that targeted this British nurse are virtually extinct in America.

Kornacki cites an example of a “spectacularly cruel” radio hoax from his youth in Massachusetts where FM radio DJs Opie & Anthony were removed from their perch at WAAF after they broadcast a hoax in which they claimed that Boston Mayor Thomas Menino was killed in a car accident.

There is a rather significant distinction to be made between a jocular prank call and broadcasters intentionally and erroneously announcing the death of a public official on the air. In fact, had Opie & Anthony not been forced from Boston’s airwaves, WAAF may have been targeted for legal action. (Full disclosure, I served as an intern for several months in 2004-2005).

Kornacki does, however, introduce a bit of welcome thoughtfulness into the conversation when he notes that it is virtually impossible for someone to foresee the reaction that the British nurse had to her being pranked by the two DJs. Kornacki seems to sense that this kind of ad hoc castigation is naïve at best and intellectually dishonest at worst.

Touré, however, displays no such sense of responsibility as he goes on to indict any broadcaster for “whatever happens” after a DJ dares engage in a prank.

“Pranks are playing with fire,” Touré said. “Whatever happens from it, you are responsible. You have to control the situation of the prank.”

This is why he goes on to cite the MTV program Punked as an example of the conditions he is advocating. This program targeted celebrities with invented situations usually involving copious amounts of time, money and production staff – three things that radio programs almost universally lack.

“These people put somebody in peril,” Touré said.

This moralistic preening is entirely reactive. It invents an epidemic that must be addressed when there is really only a single incident (and in the case of the British nurse, no confirmation that she even took her own life).

This lamentable situation is familiar. When an event like this captures the public imagination, it invites hundreds of recriminations from armchair analysts who know little about the pressures of broadcasting a daily, four-hour entertainment program, and are quick to condemn without putting themselves in the broadcasters’ positions.

Finally, it is not the DJs themselves who suffer the most when programs like these are targeted for retribution by an aggrieved chattering class – it is the staffers of these programs who lose their jobs and never get them back.

One condition of making talk radio DJs’ lives harder for them is that there are fewer and fewer who command large audiences and, thus, can demand ever-larger salaries. Broadcast outlets are loath to gamble on new talent without a built in audience, so established talk show hosts are always in demand.

The broadcaster who loses their position after an incident like this are always back to work within a couple of months at a nearby station – the industry is too small, the bottom lines too narrow and the demand for established talent too great to develop new programs or hosts. The staff left behind, however, are never so lucky.

The production, sales, management and engineering staffers who worked for the program in question are almost always the hardest hit. The DJs, who are the subject of so much self-indulgent outrage following an event like this, almost always land on their feet.

MSNBC’s The Cycle is a strong program because they have a tendency to ask themselves the tough questions and the hosts regularly strive to confront inconvenient truths along the way to their opinions. In this case, however, Touré and Kornacki took the easy way out.

The DJs are not to blame for this tragic incident. It is always frustrating for an event like this to go unresolved, with the culprits unnamed or not readily indictable. But this is one such event that does not lend itself easily to a quick and clean resolution.