Toure’s Tip Of The Hat To Journalists In Egypt 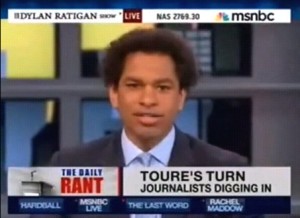 As beat up as the media sometimes gets regularly, the threat to journalism as an institution can often bring out the best in reporters. Dylan Ratigan regular Toure dedicated his regular rant to the tremendous work journalists following the unrest in Egypt have been doing, and to remind viewers that, in the 21st century, trying to shut down the media will, ironically, only reinforce the spread of information.

“If the media doesn’t tell us what’s going on, then the government will tell us what they want us to think is going on,” Toure explained, thanking the journalists on the ground in Egypt for their work, and beaming with pride for his “brothers and sisters” that dare defy the increasingly tight noose the Mubarak administration has been trying to tie on communications. “Journalists live for the thrill of finding and telling dangerous truths,” he continued, explaining once again what drove these reporters to risk their lives and the invaluable work their efforts have created.

Host Dylan Ratigan then jumped in to bring up the oft-mentioned significance of social media in promulgating information organized mass media has been systematically blocked from releasing in Egypt, but added an interesting angle– many of those using social media to get their message across are mass media journalists, resorting to the quickest and safest way to get their message across. In fact, Ratigan added, there was something “1950s” to the idea that shutting down major networks would cut off communication, as evidenced by the fact that information far out of the control of the government in Egypt is flying fast and loose over the internet. Toure agreed, but added that thinking the Egyptian government was only after mass media was to ignore the internet shutdowns that sparked the biggest protests in Cairo, Alexandria, and elsewhere to begin with.

The “rant” (actually more like a rave for intrepid journalists) via MSNBC below: