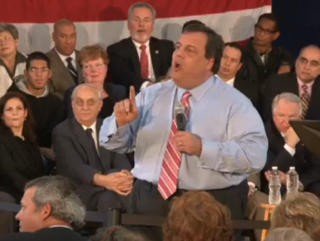 Someone attempted to grill New Jersey Governor Chris Christie at a town hall again, and thanks to that brave (or some would say, attention-seeking) soul, the media has a new viral video of the Governor getting sassy with a constituent. This time, the town hall attendant asked whether the governor planted questions at town hall meetings, citing a situation where he saw someone ask a question at another event who claimed to be a friend of Christie’s. After scolding him for “wasting time,” Christie asked, “if I plant questions, why the hell did I call on you?”

RELATED: Chris Christie Blasts Obama: What The Hell Are We Paying You For?

The event in question was a town hall in West New York, NJ, flanked by several mayors of Hudson County– including those of West New York, Weehawken, Hoboken, and my hometown of Union City– Christie took questions as he regularly did, but first laid down the ground rules. “If today is the day you decided that, because all these cameras are here, you want to show off… you want to take the governor of New Jersey for a walk, what you have to understand is that here, we are all from New Jersey.”

On that note, Christie took questions, including one from a gentleman who asked, “Do you or your staff ever plant questions at a town hall meeting?” After answering “no” and that he “barely remember[ed] being in Nutley,” the town in which the man asking claimed the planting occurred, he asked how the man got to an “understanding” that questions were planted. “I was sitting next to a woman who said she was a friend of yours,” the man explained, a woman named Candy who claimed to be a friend of the governor’s.

“I don’t know who Candy is– I may have a friend named Candy– I don’t know who you’re talking about,” Christie replied, assuring the man that planting questions “doesn’t happen” and asking indignantly, “you really, in front of this group, with all the problems we have in this state– you’re wasting these people times with a question on whether we plan questions in the audience?” The audience applauding to that scolding, Christie ended with a rhetorical question for the man: “If I plant questions, why the hell did I call on you?”

The video via the Star-Ledger below: