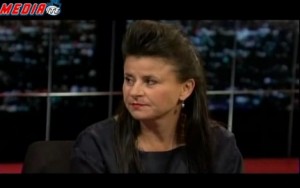 As a former stand-up comic, there are few things more painful to watch than a fellow comic bombing onstage. It gives me the same sick feeling that other people get when they see Joe Theismann get his leg snapped (thanks, The Blind Side). But I had to laugh when, on Friday night’s Real Time with Bill Maher, Tracy Ullman told a joke that died so comically hard, she had to pay a royalty to Bruce Willis.

While I’ve never been the biggest fan of Tracey Ullman’s act, the fact that her late-eighties variety show spawned The Simpsons is reason enough to want only good things for her. However, this was not meant to be, as Ullman got off to a rough start by insisting that Donald Trump was a perpetual candidate for president, prompting a polite correction from host Bill Maher. On the bright side, though, she did a pretty decent Chris Matthews impression.

Then, she made a segue-free zigzag into the Oscars, and a Kirk Douglas joke that was as uncomfortable as the restroom at a warm sushi bar:

Ullman soldiered on, though, like a true professional, and if it’s any consolation, the moment took some of the sting out of the time I was emceeing comedy night at The Ground Round, and actually had to resort to lighting my hand on fire with a stick of Brut deodorant. It wasn’t even part of a bit, I was just completely out of material. For every comic who has ever died so horribly that even the hecklers passed out like the cops at the beginning of Quincy, ME, I salute you, Tracey.