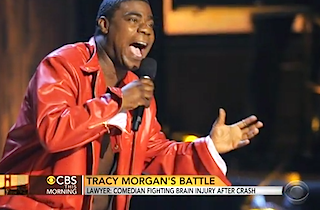 Aside from a brief appearance outside his home in July, comedian Tracy Morgan has not made any public appearances since the horrific highway crash that left him in critical condition after a Walmart truck crashed into his tour van. Now, five months later, Morgan’s lawyer has issued a dire assessment about his recovery.

“He’s fighting to get better, and if there’s a chance for him to be back to the Tracy Morgan he once was, he’s going to try to do that,” Benedict Morelli told the Associated Press on Tuesday. “But we just don’t know because of the severity of the injuries that he sustained and the fact that he had such a severe brain injury.”

“When you have a traumatic brain injury it takes a very long time to find out how you’re going to do and how much you’re going to recover,” Morelli added. “You just don’t know. So that’s where he is. He’s still fighting and trying to live his life at the same time and trying to get better, and he’s just not better. We’re hoping and praying to get him back to where he was. But the jury’s out.”

Morgan and his lawyer decided to sue the Wal-Mart corporation for negligence shortly after the crash, claiming that the company should have know that driver Kevin Roper had allegedly been awake and on the road for more than 24 consecutive hours leading up to the accident.

After the company responded by claiming Morgan was not wearing a seatbelt, the actor fired back with a statement through a representative, saying, “I can’t believe Walmart is blaming me for an accident that they caused. My friends and I were doing nothing wrong.”

Watch CBS This Morning report the news below: