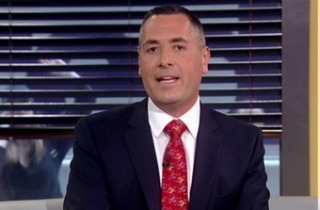 Shortly before taking his own life last week, former Fox News correspondent Dominic Di-Natale, 43, sent a text message to a close friend letting her know where authorities can find his body. That is one of many new details emerging from the story of how Di-Natale took fate into his own hands and ended his life before neurological illness consumed him.

Over at the New York Times, Ernesto Londoño paid tribute to his close friend, and revealed that Di-Natale had been diagnosed with post-traumatic stress disorder in October 2012, quietly seeking treatment before noticing other physical ailments.

In a letter to an unnamed friend, Di-Natale wrote that he hid his problems for fear of “social indignity and stigmas and the implications for my career.”

According to the report, the reporter had epilepsy as a child, and, at some point this year, experienced recurring seizures, persistent headaches, vision problems, and temporary memory loss. Following a visit to the neurologist, Londoño reported, “a brain scan indicated that he had brain damage that may have been caused by concussions he suffered following a mortar attack in northern Iraq in 2009 and a bullet that ricocheted off his helmet in Afghanistan in 2011.”

The doctor allegedly told Di-Natale that his condition would only continue to worsen.

“I cannot live like that,” he wrote in the letter. “Nor can I bear the thought of those around me watching me degenerate.”

And so Di-Natale parted amicably with Fox News on November 30 before mailing a package full of “sensitive documents” to a close friend and venturing off for “what he described as some time off.”

Mr. Di-Natale drove his cherry red Ford 150 pickup truck to scenic spot in the Colorado mountains, near Denver. Before pulling the trigger on a gun, Mr. Di-Natale sent a text message to Ms. Perry that contained a link to a map with his location.

“This is where the authorities can find me,” he wrote in the text message. “I cannot live and diminish with this illness. To my father, to you and to those I have hurt and inconvenienced, I am so very, very sorry.”

In the letter, Mr. Di-Natale asked his friend to help find a home for his two cats, which he got in Pakistan. He pleaded that they be spared from Los Angeles shelters, which, he said, had high euthanasia rates. “The girls don’t deserve an early end to their lives because of a cowardly owner,” he wrote. They have been placed in a new home.

May he rest in peace.