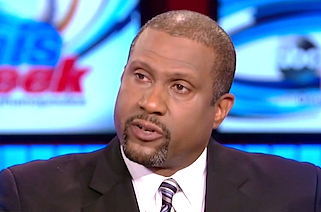 In rebuttal to the many pundits who have argued that the media “injected” race into the trial of George Zimmerman, Tavis Smiley argued emphatically to a panel on Sunday morning’s This Week that the shooting of Trayvon Martin was an stunning expression of the country’s virulent racism.

“This is, for many Americans, another piece of evidence of the incontrovertible contempt that this nation often shows and displays for black men,” Smiley said.

“In just a matter of weeks in this nation we will celebrate the fiftieth anniversary of the March on Washington, and that wonderful, brilliant speech by D.r King, ‘I Have A Dream,'” Smiley said. “In that speech you will recall that one line we all seem to know—not much else, but we all know that one line. ‘I want my children to one day live in a naton where they will not be judged by the color of their skin but by the content of their character.’ George Zimmerman knew nothing of Trayvon Martin’s character; all he saw was his color.”

“That is a big debate we’re going to have,” host George Stephanopoulos interrupted, “but that wasn’t the question in the courtroom, was it?”

Smiley didn’t really see a distinction between the systemic problems that led to the trial and the ones that concluded it.

“If you go to a barber shop, any beauty salon, even prior to the trial,” Smiley said, “and I don’t have the scientific data to prove this, but I’m a black man, I live and work in a black community—I don’t think you could find a majority of African Americans who believed that this case was going to end differently, anyway. They were hoping against hope for something different might come out.”