Trayvon Martin’s Mother On Shooting: ‘I Believe It Was An Accident’ (Update)
video

Trayvon Martin’s Mother On Shooting: ‘I Believe It Was An Accident’ (Update) 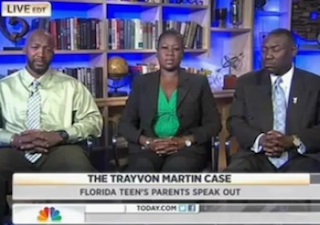 Appearing on The Today Show Thursday morning, Trayvon Martin‘s mother Sybrina Fulton revealed to host Ann Curry that she believed George Zimmerman‘s killing of her son was an accident. “I believe it was an accident. I believe it just got out of control and he couldn’t turn the clock back,” Fulton said.

Curry asked Fulton if she had the opportunity to confront Zimmerman what she would say to him.

“I would ask him, did he know that that was a minor, that that was a teenager and that he did not have a weapon? I would ask him — that I understand that his family is hurting, but think about our family that lost our teenage son. I mean, it’s just very difficult to live with day in and day out. I’m sure his parents can pick up the phone and call him, but we can’t pick up the phone and call Trayvon anymore.”

Earlier, Curry asked Fulton if she believed the criminal justice system would be able to give Zimmerman a fair trial.

“We just want him to be held accountable for what he done,” Fulton said. “We are happy that he was arrested so that he can give his side of the story.”

CNN’s Jeffrey Toobin said that Zimmerman could only be convicted if he showed a “depraved attitude towards Trayvon Martin’s life.” “That’s a tough burden for a prosecutor to meet but (Corey) has access to facts that we don’t,” Toobin explained.

UPDATE: Fulton retracted her statement that she believed the shooting was an accident, affirming in a statement she believes “George Zimmerman stalked my son and murdered him in cold blood.”

Watch Fulton’s comments below via NBC: