Trayvon Martin’s Parents React To New Video On Piers Morgan: ‘The Icing On The Cake’
video

Trayvon Martin’s Parents React To New Video On Piers Morgan: ‘The Icing On The Cake’ 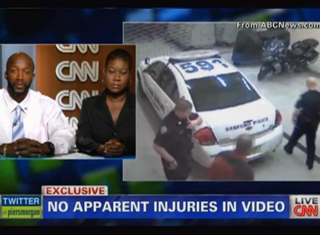 Earlier today, ABC News released surveillance footage showing George Zimmerman on the night that he shot Trayvon Martin, footage that showed him appearing not to have wounds on his face or the back of his head where the police report claimed. Martin’s parents, Tracy Martin and Sybrina Fulton, got their first glimpse of it on Piers Morgan Tonight, where the host solicited reaction.

Fulton told Piers Morgan the video sealed for her what she already believed: “we have concluded just by watching this video there may not have been any incidents at all.” Martin agreed, adding, “if he had a broken nose, how did he continue to keep his head down?” And their attorney, Benjamin Crump, took the argument a bit further, calling the police report a “fabrication” and adding, “it’s obvious to us that there was something that night they conspired to cover up.” He later added that “we don’t need anything else to know there is some sort of conspiracy to keep Trayvon Martin’s death under the rug.”

Reacting to the comments made by Joe Oliver on Zimmerman’s state of mind, Fulton showed sympathy. “It just shows that there is a human side to George Zimmerman,” she reacted, “we are crying too, we are agonizing, too.” Martin answered what he would say to Zimmerman if he saw him today, and gave a similarly soft-spoken answer: “my son was not one of these thugs in the night, he was loved, I would just ask him why did he in fact take my son’s life, and how does he feel?”