Truck Crashes into TV Station; Suspect Barricades Self in Building 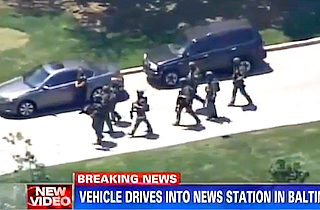 According to reports, a potentially-armed suspect drove what may be a dump truck into the WMAR-TV studios in Maryland and has barricaded himself inside; the SWAT team has been dispatched and a local school is on lockdown. Unable to get on air to report the story, WMAR reporters are live-tweeting the incident.

The guy is holed up in the building police found weapons in his vehicle.. we remain evacuated pic.twitter.com/0jq0nSrAkm

Guy kept chanting I am God when he first walked up to the door of the building. went back for his industrial sized truck and rammed building

We are out of @ABC2NEWS everyone accounted for and safe. All night crew needs to stay away. Day crews in field, same thing.

Don’t much other than some guy drove a dump truck through our frot door. Waiting on more info from police on scene. @ABC2News

Just did head count. Everyone is out of building and safe. Many are calling loved ones now to let them know they are ok. #team2. @ABC2News

We ran through newsroom with @KellyfromABC2 screaming for everyone to get out. Went out back door to lot. #team2

This is so insane. Police are in the building. Helicopters up. #breaking

Can't really tell too much but that was our entrance. There is now a truck in the lobby. pic.twitter.com/py1FhqK4JY

Watch a report below, via CNN: