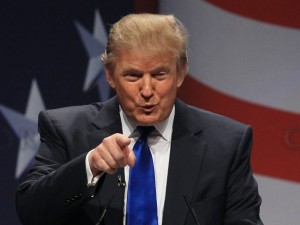 Donald Trump is on an extensive media tour telling anyone who will listen (including, in the last week alone, Fox & Friends, Geraldo Rivera, and the ladies of The View) about his concerns regarding President Obama’s birth certificate.

Many are wondering whether Trump truly believes Obama might have been born in another country or whether he is simply using this as an opportunity for self-promotion and media attention (which, if true, seems to be working, the ratings for Trump’s Celebrity Apprentice just hit a season high). However, I propose that neither theory is true. Instead, Trump has merely made a dispassionate and calculated business decision that exploiting a weakness in a competitor is the best strategy for victory. In other words, if Trump is really serious about running for President, he could care less where Obama was actually born, but is very excited to have found an attention-grabbing vulnerability in the President.

Trump’s response to why he didn’t ask for the birth certificate of any past President is simply that his potential opponent is Obama and not any past President. More significantly, if you take his candidacy even somewhat seriously, Trump is using a classic campaign strategy, focus on any chink in the Obama re-election armor. If Trump runs, he wants to win, and part of being successful is making it as difficult as possible for your opponent to triumph, even if that means playing dirty.

Yet many question why bringing up the birth certificate could even be perceived as a winning strategy. Even Karl Rove recently suggested that it’s such a bad strategy for Republicans, and he suspected Obama himself was fueling the controversy in order to make Republicans who focused on it look crazy. However, for those paying close attention, the thrust of Trump’s complaint is not that Obama was born in Kenya and he should be impeached. Instead, it seems Trump’s argument has been why is the most powerful man in the country hiding anything from the people who elected him? Especially given that Obama promised the most transparent White House in history, could Trump’s unanswered plea for Obama to share a document become transformed into an issue of transparency rather than country of origin? Oh boy, now I’m not sure if that makes me a birther too!

A recent statistic suggesting a majority of Republican primary voters don’t believe Obama was born in America has been ridiculed by some as being all about race, yet I wonder whether such results and Trump’s behavior can both be explained by the same rationale. Trump and most Republican “birthers” may feel so strongly that another term of Obama’s policies will be so detrimental to the future of the country that they are willing to employ any tactic that could help defeat Obama. That may make them ruthless, and maybe even at times inappropriate, but as Trump knows first-hand from his business success, a willingness to be a fierce, no-holds-barred competitor can often lead to the greatest achievement even if, for now, it means being seen as a fringe political character in the national discussion.