Trump Admits to Walters: If I Don't Get the Nomination, ‘Yes, I Would Be a Loser’
video

Trump Admits to Walters: If I Don’t Get Nomination, ‘I’d Call Myself a Loser’ 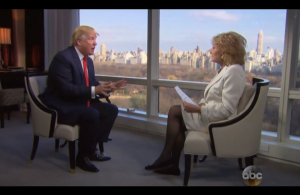 On Thursday night, the legendary Barbara Walters presented her annual list of The 10 Most Fascinating People of 2015. Walters has aired the special now for twenty-three years, and — surprise, surprise — current Republican frontrunner Donald Trump made the short list.

The interviews that Walters does for the special are far more engaging and often more clever than most you see. So the television vet knew exactly the question to ask Trump based on his own campaign rhetoric that might paint him into a corner.

Keeping in mind Trump’s well-known penchant for declaring his love for victory — he once told supporters at a campaign stop that the American people would be “so sick of winning” under his Presidency — Walters asked him pointedly: “If you lose the Republican nomination, are you a loser?”

A stumped Trump seems as if he is about to answer, then pauses to recognize the predicament that Walters put him in. Eventually he concedes, “In a certain way, yeah.”

“I hate to say it. If I lost the nomination, yeah. I guess I’d call myself a loser. I’ve never said that about myself before,” a seemingly defeated Trump says. Skip ahead in the video to the 3:35 mark for the exact question from Walters, and judge for yourself how devastating the prospect of losing, even just once, would be for the perennial victor Trump.

Check out the above video from ABC.