Trump Advisor on #BlackLivesMatter Protester Beat Up at Rally: Maybe He Deserved It
VIDEO

Trump Advisor on #BlackLivesMatter Protester Beat Up at Rally: Maybe He Deserved It 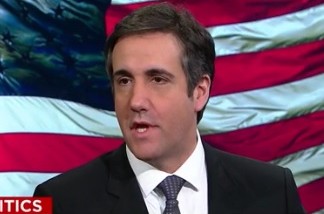 In an interview on CNN’s New Day, Donald Trump advisor Michael Cohen backed up his boss’ comments about a #BlackLivesMatter protester who was roughed up at a Trump rally, saying the man might have deserved it.

“The guy’s a professional agitator. Supposedly, rumors are out there on the internet and social media, the guy has been tased, what, 30 times? He goes to these various different rallies and he creates all sorts of problems,” said Cohen, the executive vice president of the Trump Foundation.

“You know what, it happened,” he said. “Obviously nobody wants to see anybody get injured.”

Trump Adv. on Alabama protester: “Maybe he did deserve it… this has nothing to do with #BlackLivesMatter” https://t.co/wvX9mB09N2

“That’s not what [Trump] said,” host Chris Cuomo noted. “He said maybe he deserved it.”

Cohen reversed himself and defended his boss, saying, “Well, maybe he did. Maybe he did. He went there to cause a problem, he went there to start a fight. This is nothing to do with #BlackLivesMatter, this is a guy that’s looking for need media attention.”

“White, black, green, yellow, a guy comes to your event and gets beat up, [Trump] should be against the people that beat him up,” Cuomo argued.

“I agree, nobody wants to see anybody get beaten up,” said the man who just said he maybe should have been beated up. “But if the guy goes there for the purpose of creating an issue, he wants to be an agitator at what was a great event for Mr Trump, 14,000 plus people. You know what? That’s between the individual who wants to be an agitator and the people who are there to listen to Mr. Trump.