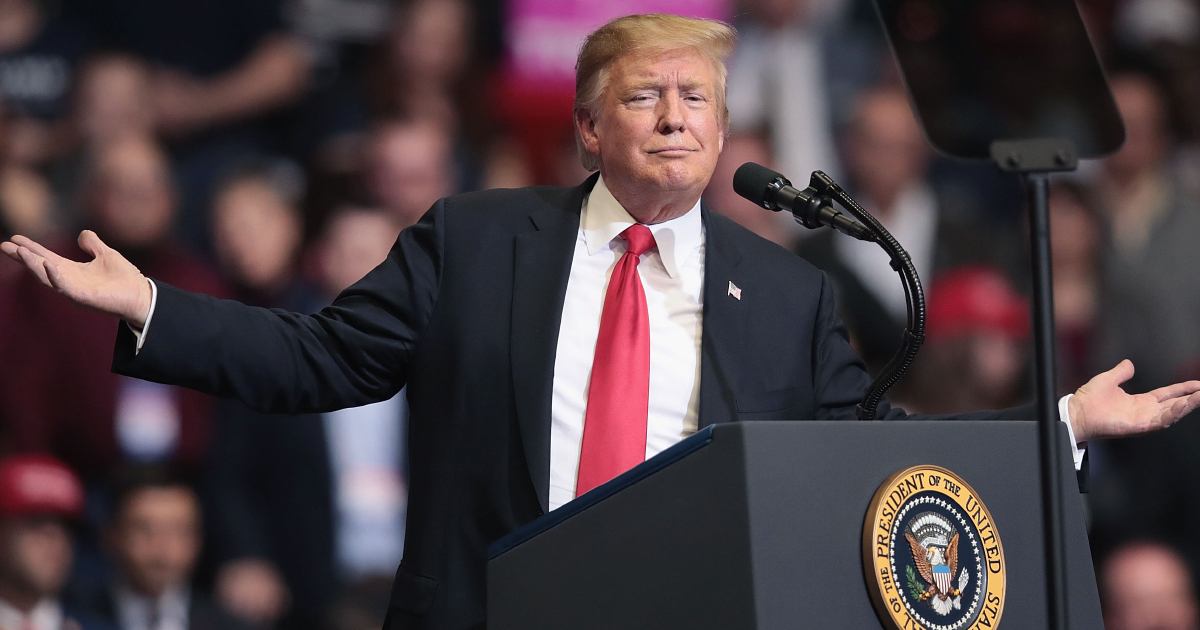 Making a 180 in politics isn’t done all at once. You have to lay groundwork, make partial turns, and then pretend to “end up” in reverse. It can’t seem like it was planned. And before you even lay the groundwork, you float a trial balloon.

That’s what it looks like the President and his pals at Fox & Friends are doing on Tuesday as they push back against the Democrats’ demands regarding release of the Mueller report.

To be clear, some Republicans have already strongly opposed releasing the report. In fact some were ready to burn it before Barr even summarized it. But the path to changing the argument for your entire political party requires smaller steps.

On Fox & Friends on Tuesday, the topic of the report came up several times. In each case, the hosts and guests objected to the Democrats, particularly committee chair Rep. Jerry Nadler (D-NY), overreaching with their subpoenas for the report and their timeframe demands. This is the “I’m not objecting to this, I’m objecting to how you’re doing it” phase.

They started with Andrew Napolitano, who made a reasonable case against a 100 percent un-redacted release of Mueller report, classified info or reputation-tarnishing info be damned. There are rules against that, and it’s unethical. So it’s a reasonable objection to such a demand, if indeed anyone is actually demanding that. But after that discussion, Judge Napolitano and host Brian Kilmeade hit the theme: It doesn’t matter what we give them, it won’t be enough anyway.

Later in the show, host Steve Doocy interviewed Rep. Jim Jordan on the same topic. Again, the premise was that Democrats are being unreasonable in both time-frame and scope of their request. Which is, again, a reasonable objection.

Doocy spun up a clip of Rep. Nadler from way back during the Ken Starr investigation into Bill Clinton, during which Nadler objected to releasing the report on essentially the same grounds Napolitano discussed earlier in the show.

Showing Nadler’s objection to release of Starr report is itself a bit of groundwork, albeit totally worth doing considering the flip. But pointing to the other side as hypocrites is S.O.P., and the great thing about Nadler’s clip is that his objection appeared to be to releasing the report at all. Which is where you go with the Mueller report, if you want to do a 180.

And a 180 could be exactly where Trump is headed. Just look at this tweet.

There is no amount of testimony or document production that can satisfy Jerry Nadler or Shifty Adam Schiff. It is now time to focus exclusively on properly running our great Country!

That’s the first of, like, three conversations that lead to you saying don’t release the report. There’s this, and then in a few days it’s, “Oh you know, I kinda wanna, ya know, move on completely and not even read it,” and then there’s the big, “Oh I’m against it now.”

Rep. Jordan lays down that the Democrats are unsatisfied with the report, which is true. “Now what they’re saying is, we want to find something, we have to find something because we’re so committed to getting at this president and not focused on, frankly, doing what’s best for the country.”

It doesn’t matter what we give them, it won’t be enough anyway. Focusing on this isn’t focusing on what’s best for the country.

After the clip of Nadler, Jordan adds that Democrats are “out to get” Trump, and that’s why they want the report made public. Now, he doesn’t say that none of the report should be made public, but he does say that the Democrats only want it because they want to “get” Trump. That’s what Napolitano said to Kilmeade, and what the hosts are suggesting, and what Trump says in his tweet. The underlying premise of the reason to make it public, they are saying, is Trump Derangement. The unspoken (so far) remainder of that argument is, “and therefore the request is invalid.”

For a little more sauce, watch this other tidbit from the Napolitano segment.

“The Democrats want to know what is in there that is negative about the President, but not negative enough” for an indictment. He said that they want to know it only for political reasons, which is true. But he also notes that there’s a “troublesome” issue for the President.

He said Dems would have to “persuade a Federal judge that on balance, the public’s right to know what Bob Mueller found out about Donald Trump is greater than Donald Trump’s right to privacy,” he said. “Because the President said ‘release it all, I don’t care, I have nothing to hide.'”

“That could be considered a waiver of his right to privacy,” said Napolitano.

And just two hours later, Trump tweeted, saying “no amount of testimony or document production that can satisfy” the Democrats (it won’t be enough anyway), and that it’s time to focus exclusively on what’s best for the country.

Groundwork? Test run? Trial balloons? Maybe. At the least, it’s a theme repeated several times by the show and then tweeted by Trump.

Watch the clips above, courtesy of FOX News Channel.