Trump and O’Reilly Face Off on Kim Davis, Abortion, #BlackLivesMatter 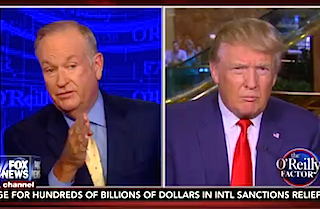 Donald Trump made his big return to Fox News after a rare two-week absence Tuesday night with an interview at the top of The O’Reilly Factor.

Host Bill O’Reilly began with the Syrian migrant crisis. Asked if he would allow Syrian refugees to enter the United States, Trump replied, “I hate the concept of it, but on a humanitarian basis of what’s happening, you have to.” The GOP frontrunner then pivoted to blame President Barack Obama’s foreign policy for the entire situation.

Next up was Kim Davis, the Kentucky clerk who was released from jail today following her refusal to issue marriage licenses to same-sex couples. “It was too bad that she had to be put in jail and I’m a very, very strong believer in Christianity and religion,” Trump said, “but I will say that this was not the right job for her.”

Moving on to one of O’Reilly’s favorite topics, the Black Lives Matter movement, Trump was quick to declare, “All lives matter.” This gave O’Reilly the chance to confront Trump about his stance on abortion. If “all lives matter,” then the host wanted to know why Trump has opposed cutting off funding to Planned Parenthood.

It was just a few weeks ago, on Fox News’ Hannity, that Trump said abortion is only a “fairly small part of what they do” and stressed that “we have to look at the positive also for Planned Parenthood.” In response, the organization put out a statement that praised Trump for rejecting the “extreme positions” held by other members of the Republican Party.

UPDATE – 9/10, 1:56 pm EST: O’Reilly responded to Trump telling him he got wrong information on The Factor last night. Watch here, via Fox: