Trump Campaign Manager: He Didn’t ‘Lie’ About Lester Holt, He Spoke Without Knowing the Truth 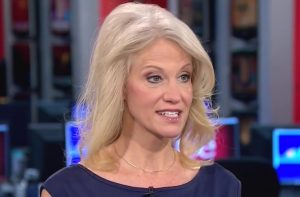 When confronted with the fact that Donald Trump falsely accused NBC host and Monday night’s debate moderator Lester Holt of being Democrat, his campaign manager Kellyanne Conway insisted on MSNBC’s Morning Joe that Trump didn’t lie, he just spoke without knowing the truth.

“He said Lester Holt was a Democrat. Lester Holt is a Republican. How could he say such a thing that just black-and white factually incorrect?” asked guest and Bloomberg Politics host Mark Halperin.

“I don’t know that he knew what Lester Holt’s voter registration is,” Conway said.

“Without knowing then, he asserted he was a Democrat?” Halperin asked.

“First of all, if you tell me the media are not overly populated with Democrats, that’s false,” Conway argued.

“I’m asking about a very specific thing,” Halperin said. “He made a factual claim about the moderator who deserves the right to be treated fairly and it was just wrong. And it’s a metaphor for his frequently in public stating things with no basis, that are wrong.”

.@KellyannePolls: Trump ‘didn’t lie’ about Lester Holt, ‘a lie would mean that he knew the man’s party registration’ https://t.co/dZWTCwpoim

Conway replied that they were happy with Holt as moderator, and went on a long defense of NBC’s Matt Lauer‘s handling of the presidential military forum. “This is a filibuster,” host Mika Bzrezinski said partway through.

“You’re not answering what I asked you,” Halperin said. “I’m asking you how someone running for president can assert on the eve of the debate that the moderator is a Democrat, which is factually incorrect? How can he do that?”

“Should he have asked him his voter registration?” retorted Conway, somewhat condescendingly.

“He shouldn’t have asserted– he didn’t say, ‘I don’t know what he is, but I think he’s biased,’ he said he’s a Democrat,” Halperin insisted.

Conway again pivoted, and attacked Hillary Clinton for her own working of the refs ahead of the debate and attacked the media coverage of the campaign. “I don’t understand what that has to do with Mark’s question,” Brzezinski said when she was finished.

“We are frustrated by media coverage,” Conway replied.

“We were asking why he lied about Lester Holt.”

“Um, I think he did,” said Brzezinski.

“Mika, a lie would mean he knew the man’s party registration,” argued Conway.

“So as president, would he say things that are false without knowing the truth?” asked a disbelieving Halperin. Unfortunately, co-host Joe Scarborough cut in then to wrap up the discussion, and he never got an answer.