Trump Clashes With Greta Van Susteren, Blames Her For Bringing Up Birther Issue 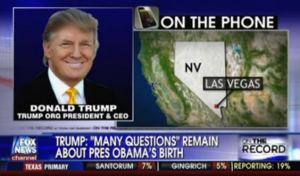 Because he’s once again planted himself in our news cycle, Donald Trump spoke to Greta Van Susteren on Tuesday night about none other than the birther issue. Defending his claims, he went on to blame Van Susteren for instigating discussion of the issue. If she and everyone else didn’t bring it up, he said, he wouldn’t be talking about it.

Noting the recent debacle in Arizona, in which the secretary of state demanded verification of the birth certificate from Hawaii, Van Susteren asked, “Are you still not satisfied?” What more do you need, she inquired — noting that she and Trump differ on this issue.

Trump offered up his recycled talking points about the doubts surrounding the authenticity of the birth certificate, repeatedly emphasizing the “many questions.” He added, this is not an issue Obama likes, “this is not something he enjoys.”

But he digressed: the more important issues are what’s going on in the rest of the world. Issues like OPEC and the national debt. “I would much prefer discussing that,” he said. Van Susteren said the Obama campaign likely enjoys that this issue gets pinned to him, an assertion with which Trump immediately disagreed. Trump argued, “I actually sort of semi-know for a fact that they hate the subject.” (Well, if he “semi-knows,” who are we to argue?)

Van Susteren pushed back, saying if he thinks OPEC and jobs are the real issues, then he shouldn’t get distracted by the birther issue. We’re not talking about these issues, she said, we’re just name calling on both sides. “That’s because you and everybody want to bring it up. I don’t bring it up. […] Frankly, if you would’ve not brought up the birth certificate…I wouldn’t be discussing it with you.”

Yes, she said, but it’s also become a part of the campaign. The birther controversy is now being used to suggest that Romney “somehow lacks any moral leadership.” Referencing John McCain‘s now-famous defense of Obama, in which he pushed back against the woman who asserted he’s a Muslim, Trump said, maybe we shouldn’t follow his example. After all, he lost the election. Van Susteren further said he discusses this issue on Twitter, that the question isn’t out of thin air. Trump said it’s been in response to reporters, adding, “I have a very large number of Twitter, you know, my Twitter is very large.”

About the place of the birther controversy in the campaign, Trump said, “I actually think it’s a great issue for Mitt Romney.” Though he noted they’re likely to agree to disagree on this one.