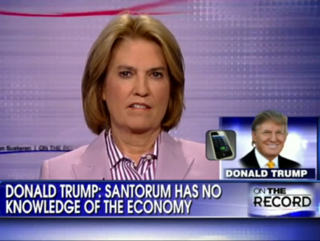 Donald Trump really does not like Rick Santorum. After becoming a Mitt Romney surrogate, Trump has taken to calling for Santorum to step aside and calling him “not a team player” for staying in the race. On last night’s On the Record, he made the same calls, arguing that “women would vote against him like you wouldn’t believe” and he “has no knowledge of economics,” but when asked whether Newt Gingrich, who has won two states, should do the same, Trump abstained. “He’s a friend of mine– and he’s a member of my club in Washington.”

RELATED: Donald Trump: GOP Candidates ‘Disgraceful’ By Staying In Race Instead Of Getting Behind Romney

“He can’t win no matter what, under any circumstances,” Trump told Greta Van Susteren last night, “he can’t get the votes, he can’t get the delegates, he can’t, there’s just no way he can do it.” Trump argued that Santorum, by virtue of losing his Senate seat “by the largest amount in the modern-day Senate” shouldn’t be running, not to mention his lack of business savvy in Trump’s eyes, and his alienation of female voters.

“What about Gingrich?” Van Susteren interjected.